I lugged the camera to my Alma Mater, Augustana during a bitterly cold week in March. It didn’t see much use, but I did venture out to take a few pictures in between speaking engagements. Founded in 1910 as Camrose Lutheran College, I was part of the first class to graduate as Augustana University College, and this year marks their centenary even though the institution became a part of the University of Alberta in 2004.

Augustana is a pretty special place in terms of my own memories and personal history. I’ve been back a few times, but spending a full day and a half on campus made a huge difference this time in stirring up a lot of emotions. Strangely, it’s because of the changes that have happened on campus that I feel almost closer to the place now than I have at any other time since I left. Perhaps the bonds of nostalgia have grown with age, but it is also in no small part due to how the campus has rediscovered its own place in both global and local terms. Reading Roger Epp’s reflections on Augustana in his We Are All Treaty People brought home a lot of issues that I’d been struggling with in terms of thinking about the role of the university and the distinctive education I received at Augustana.

Being back at this moment, during the centenary, and being a part of Roger’s last year as Dean, was a tremendous experience which I am incredibly grateful for. 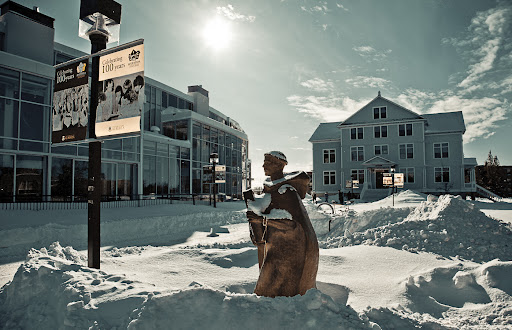